Three persons were confirmed dead and 69 others injured in an accident involving a Dangote Cement Plc’s truck and a Bus Rapid Transit vehicle on Tuesday at the Ogolonto area of Ikorodu, Lagos State.

PUNCH Metro learnt that the truck, which was laden with 45 tonnes of cement, suffered brake failure around 10.30am and skidded into the BRT lane, and crushed the bus with number plate LSR 228 XS.

It was gathered that while the BRT driver, Samuel Akpochi, and a bus trainee died in hospital, a female passenger died on the spot.

PUNCH Metro learnt that the injured passengers were taken to the Ikorodu General Hospital and the Lagos State University Teaching Hospital, Ikeja.

An eyewitness, who identified himself simply as Wale, said one of the passengers died at the  Ikorodu General Hospital, adding that other injured passengers were taken to different hospitals.

He stated, “These truck owners want to maximise their returns. They don’t care what happens to an overloaded truck. From what the officials said, the truck conveyed 45 tonnes of cement, way beyond its capacity.

“Many people were evacuated from the wreckage alive but suffered severe injuries. I’m convinced that many may not be able to walk again. They have all been taken to the Ikorodu General Hospital.

“If those in authority can regulate the operations of trucks on our roads, the country will have less carnage every year.”

Another eyewitness, who identified himself simply as Chinedu, noted that it was a horrible sight as some people were busy stealing the victims’ phones and money rather than rescuing them.

“The situation was horrible. I thought the people, who gathered at the scene, were going to rescue the victims, but they went there to steal and as soon as they were done removing phones and money from the victims, they disappeared.”

One of our correspondents observed that scavengers were busy parking some of the broken parts of the bus and the truck. 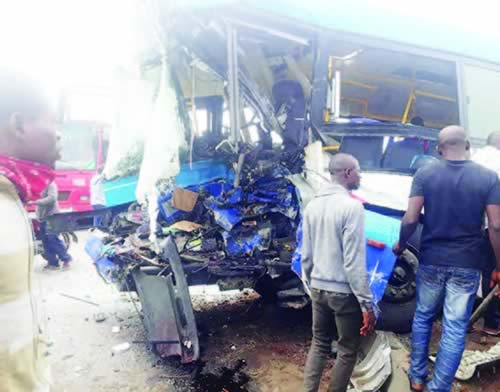 Scene of the accident

The Director-General, LASEMA, Dr Olufemi Oke-Osanyintolu, stated that all the passengers on board the BRT vehicle were injured, adding that investigation would be conducted to determine the factors responsible for the accident.

He said, “A Dangote truck loaded with cement suffered brake failure and had a head-on collision with a Primero blue mass transit bus with number plate LSR 228 XS, which was conveying 40 seated and 20 standing passengers.

“All the passengers on board suffered injuries with one female passenger losing her life and the BRT driver suffering life-threatening injuries with his leg decapitated. Recovery operations are ongoing.”

The state Police Public Relations Officer, DSP Bala Elkana, who confirmed the death of three persons, noted that 32 injured passengers had been taken to hospital.

“Three people died in the accident. We have moved 32 people, who were injured, to hospital for treatment,” Elkana stated.

The Public Relations Officer, Primero, Cletus Okordolor, who confirmed the accident, noted that it was a sad day for the company.

He said, “Two of our busmen died in the accident, the driver and a trainee, who was on the shadow run. The bus conveyed about 70 passengers. It has been a sad day for us.

“We have successfully moved all the victims to the General Hospital in Ikorodu and those whose cases are critical have been moved to LASUTH. The bus driver and the trainee died in the hospital while receiving treatment, while a female passenger died on the spot of the accident.

Dangote Group’s Chief Corporate Communications Officer, Mr Anthony Chiejina, expressed sadness over the accident, noting that the truck was owned by one of Dangote Cement’s distributors.

Chiejina said the company had commenced investigations into the accident.

He said in a telephone conversation with one of our correspondents, “We are saddened by  this unfortunate accident involving a BRT bus and our distributor’s. We sincerely commiserate with those affected by the accident and members of their families.

“Dangote Cement is working with the distributor to ensure appropriate medical response for the victims.”