Gordon Sondland, the US ambassador to the European Union testified to working with Ukraine at US President, Trump's request. 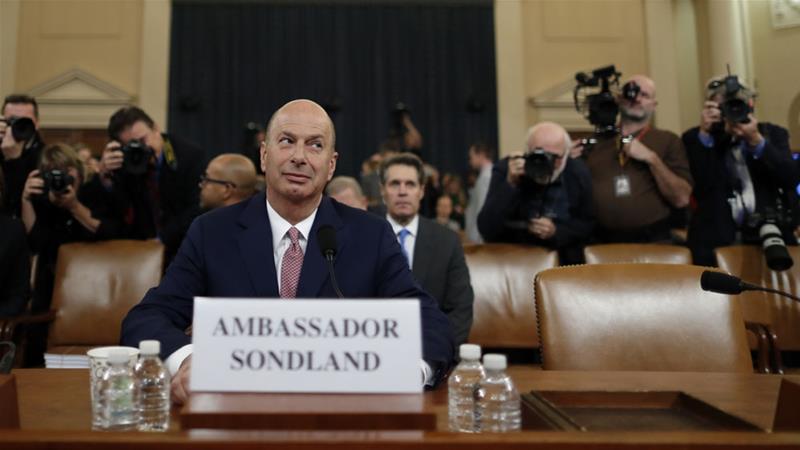 Washington, DC - A top US diplomat told the House impeachment inquiry on Wednesday that he worked with Rudy Giuliani, President Donald Trump's personal lawyer, on Ukraine at the "directions of the president", and that "a quid pro quo" with Kyiv did take place.

Gordon Sondland, the US ambassador to the European Union, said that although Trump never directly told him what he wanted Ukraine to investigate, Giuliani's instructions "reflected President Trump's desires and requirements".

"I know that members of this committee have frequently framed these complicated issues in the form of a simple question: Was there a 'quid pro quo?' As I testified previously, with regard to the requested White House call and White House meeting, the answer is yes," Sondland said.

The "quid pro quo" (Latin for "a favour for a favour"), he said, involved a White House visit for Ukrainian President Volodymyr Zelenskyy in exchange for Kyiv announcing it would pursue investigations into Trump's political rival, Joe Biden, and a now-debunked conspiracy theory that Ukraine, not Russia, interfered in the 2016 US presidential election.

"Mr Giuliani was expressing the desires of the president of the United States, and we knew that these investigations were important to the president," Sondland said. 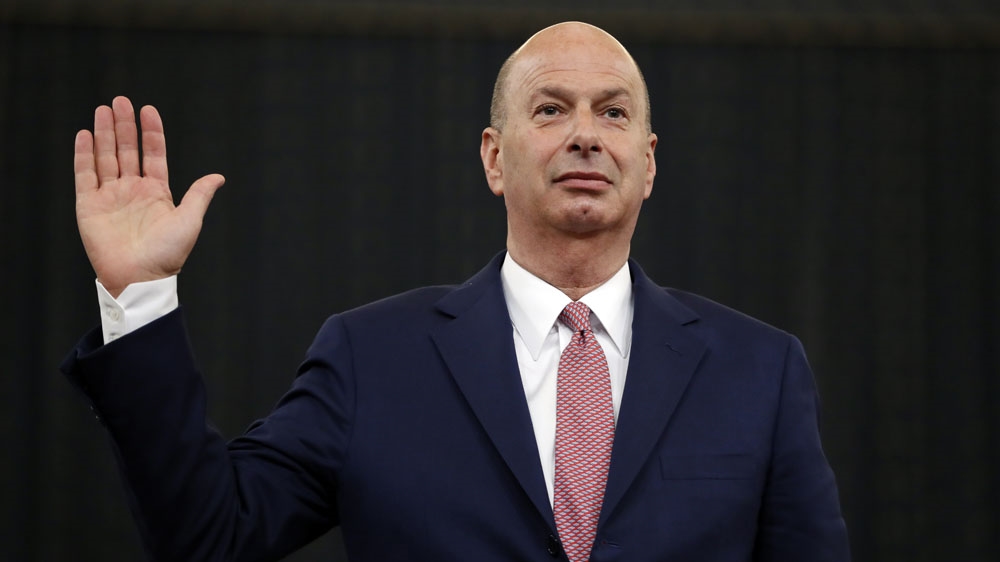 Sondland's bombshell testimony comes at a pivotal moment in the Democrat-led House's impeachment proceedings now in the midst of the second week of public hearings.

The inquiry is centred on a July 25 phone call between Trump and Zelenskyy in which the US president asked the new Ukrainian leader to launch an investigation into former Vice President Joe Biden and his son, Hunter, who had served on the board of Burisma, a Ukrainian gas company. There is no evidence of wrongdoing by the Bidens.

Sondland said he was one of three top Trump officials asked "at the express direction of the president" to work with Giuliani, despite their reluctance to do so.

Trump has denied any wrongdoing in his dealings with Ukraine, repeatedly saying there was "no quid pro quo". He has labelled the inquiry a "witch-hunt", and has attacked several witnesses who have testified.

On Wednesday, Trump uncharacteristically read from a notepad as he told reporters Sondland's testimony exonerated him.

Trump also said he did not know Sondland "very well".

"I have not spoken to him much. This is not a man I know well. He seems like a nice guy though," Trump said.

'Everyone was in the loop'

During his testimony, Sondland gave the committee emails and text messages that he said show Secretary of State Mike Pompeo and former National Security Adviser John Bolton and other senior officials were fully aware of what Sondland was telling Ukrainian officials.

"They knew what we were doing and why," Sondland said. "Everyone was in the loop. It was no secret."

A State Department spokeswoman told Reuters News Agency on Wednesday that Sondland "never told Secretary Pompeo that he believed the president was linking aid to investigations" of Trump's political opponents.

"Any suggestion to the contrary is flat out false," Reuters quoted the spokeswoman as saying.

Sondland said Giuliani told him, Energy Secretary Rick Perry and Ambassador Kurt Volker - who were charged by the president with talking to Ukraine - that "the president wanted a statement from President Zelenskyy committing Ukraine to look into corruption issues."

He added: "Giuliani specifically mentioned the 2016 election, including the DNC server, and Burisma as two topics of importance to the president."

The Department of Energy in a statement said Sondland's testimony "misrepresented" Perry's interactions with Giuliani and the instructions he received from Trump.

"As previously stated, Secretary Perry spoke to Rudy Giuliani only once at the president's request," said Shaylyn Hynes, the Department of Energy press secretary. "No one else was on that call. At no point before, during or after that phone call did the words 'Biden' or 'Burisma' ever come up in the presence of Secretary Perry." 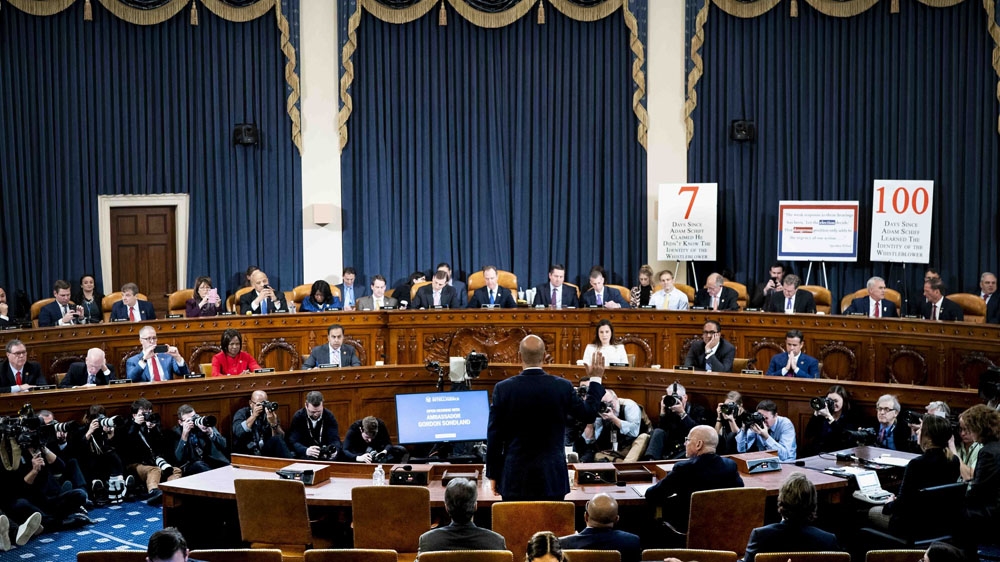 Sondland also confirmed that he held a five-minute cellphone call with Trump from Kyiv in which another witness to the call, embassy aide David Homes, said he discussed Zelenskyy's readiness to open the investigations Trump wanted.

"The White House, which has finally shared certain call dates and times with my attorneys, confirms this," he said. Sondland said "I do not recall" whether he and the president discussed the investigations on that call, but added he did not dispute Holmes.

"Actually, I would have been more surprised if President Trump had not mentioned investigations, particularly given what we were hearing from Mr Giuliani about the president's concerns," Sondland said.

Sondland said that by September he had become concerned that $391m in US security aid to Ukraine had become "jeopardised" by a White House "log jam". As a result, Sondland said he pushed a senior Ukrainian official to move forward with the investigations Trump wanted in order to release the aid.

"We tried our best to fix the problem while keeping the State Department and the NSC closely advised," Sondland said, referring to the National Security Council. 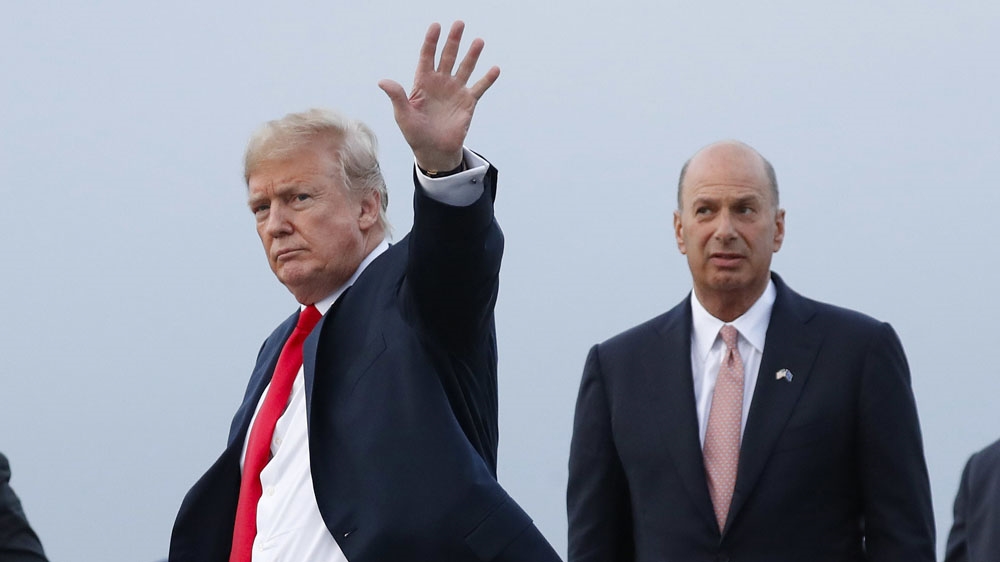 Trump is joined by Sondland as he arrives at Melsbroek Air Base in Brussels, Belgium [File: Pablo Martinez Monsivais/AP Photo]

Democrat Adam Schiff, who is leading the House inquiry, said Sondland's testimony so far "goes right to the heart of the issue of bribery as well as other high crimes and misdemeanours", citing the core elements in the US Constitution that justify impeachment of a president.

"The veneer has been torn away" from the White House and State Department's efforts to block the congressional investigation, Schiff said.

Sondland had previously provided 10 hours of closed-door testimony to the House inquiry, which he later amended after other witnesses came forward with specific information about his role in the controversy. He was far more forthcoming in public on Wednesday.

Meanwhile, Republicans in Congress repeatedly questioned Sondland's testimony for his "presumption" that security aid to Ukraine was being withheld in exchange for a promise from Zelenskyy to investigate Biden.

"It became clear to all of us that President Trump was not very interested in engaging. He wanted Giuliani to handle it," Sondland said.

Sondland said the only direction he could recall from Trump was in a short phone call in which the president said there was "no quid pro quo".

"No one told me that the aid was tied to anything. I was presuming that it was," Sondland said.

Analysts said Sondland's testimony was explosive and may offer a turning point for the impeachment investigation.

"Sondland is in some trouble. He has already corrected his testimony once after it was contradicted and now it has been contradicted again," said Barb McQuade, a professor of law at the University of Michigan.

"He still maintains that he didn't know that Burisma meant Biden, but he now admits that there was a quid pro quo, that Trump directed it, that Giuliani was running the negotiations and that he told Pence about it on September 1," McQuade told Al Jazeera. "The facts are coming into focus. The statements by Trump and others to deny a quid pro quo seem like consciousness of guilt."

"He threw the president under the bus," Rossi said.

Cooper told the House committee her staff began receiving email inquiries from Ukrainian officials about the status of the US military aid as early as July 25, the day of the Trump-Zelenskyy call.

Trump's Republican allies in the House have argued that there could have been no pressure applied on Zelenskyy in the July 25 phone call because Ukrainian government officials did not yet know that military aid had been suspended.

Cooper told the inquiry her staff received two emails from the State Department on July 25 indicating Ukraine embassy officials and members of Congress were asking about the aid and knew about the White House hold on it.

"Specifically, the Ukrainian staff asked, 'What was going on with the security aid,' " Cooper said. 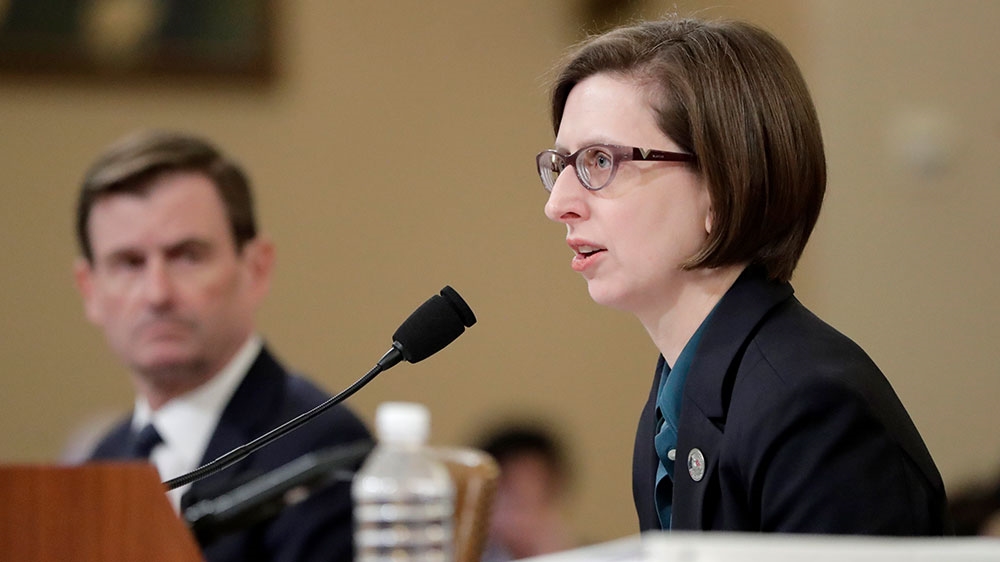 Once her staff learned the aid had been put on hold, Cooper said she and other defence officials advocated vocally within the Trump administration for release of the aid.

"The Ukrainians are on the path to being able to provide for their own security but they will still need US allied support for some time," Cooper told the House Intelligence Committee.

"They need that support in terms of tangible support as well as political and diplomatic support," Cooper told the inquiry.

Fiona Hill, the former top Russia expert at the White House's National Security Council, and David Holmes, a political affairs officer at the US Embassy in Kyiv, are scheduled to testify before the impeachment inquiry on Thursday.

Do you think this is evidence is enough to get Trump impeached?