An auction house in Switzerland has sold 25 luxury cars including Ferraris, Rolls-Royces and Lamborghinis that Geneva authorities seized from the son of Equatorial Guinea's president in a money-laundering probe.

Swiss authorities say the sale Sunday by auctioneer Bonhams fetched £21.9 million, with the proceeds going to a charity to benefit the people of oil-rich Equatorial Guinea.

The sale took place at the Bonmont Golf & Country Club in Cheserex near Geneva, Switzerland. 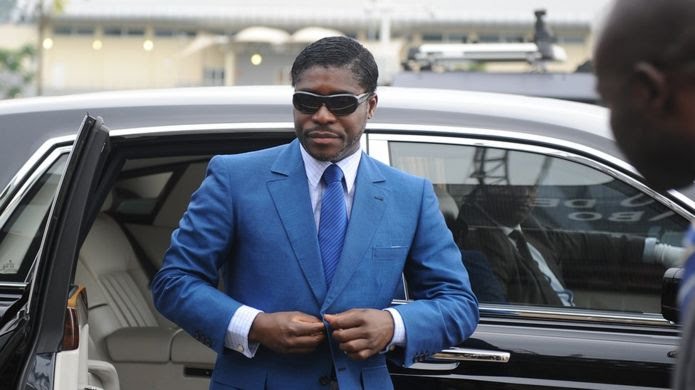 When Swiss authorities seized the cars, they also ordered the sequestration of a yacht.

However, it was later released in an arrangement under which Equatorial Guinea agreed to pay Geneva authorities £1.1 million 'notably to cover procedural costs'.

A white-and-cream Lamborghini Veneno roadster, one of only nine such versions produced, was the star of the auction.

It was expected to fetch at least £4.3 million. Teodoro Nguema Obiang Mangue (pictured), the son of the Equatorial Guinea's four-decade president, Teodoro Obiang, was probed over money laundering and mismanagement of public assets, which led to the seizure of the luxury fleet of cars.

Equatorial Guinea president's son, who is also a vice president, has been ensnared in legal trouble elsewhere.

Last year, Brazilian officials said $16 million (£13 million) in undeclared cash and luxury watches that were seized from a delegation he led may have been part of an effort to launder money embezzled from the country's government.